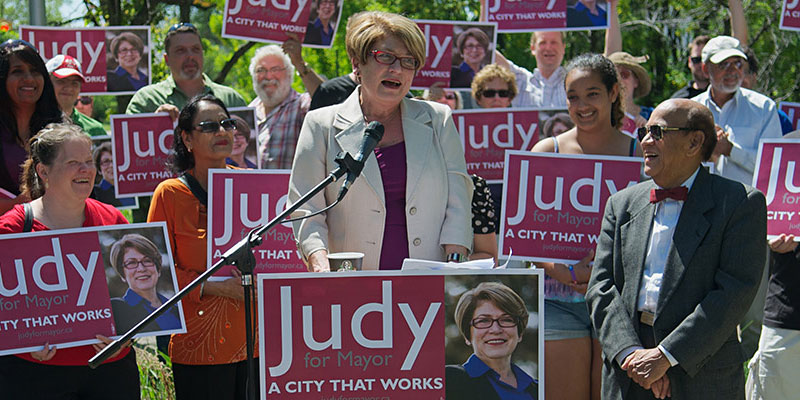 A City That Works for Everyone

On June 3rd Judy announced her bid to be the next mayor of Winnipeg.

Throughout the campaign Judy has made her vision clear. She wants to build A City That Works for everyone.

Judy describes Winnipeg as “a warm, generous, talented and diverse community that pulls together in times of crisis and celebration.“ She is committed to be “a mayor who fights for everyone in this great city.”

Judy believes A City That Works develops responsibly and sustainably and is guided by a plan. A City That Works is transparent and accountable — decisions are made in a manner that assures its citizens that their tax dollars are being spent wisely and fairly.

A City That Works has a leader that collaborates with other big city mayors to negotiate with federal and provincial governments for a fair deal for cities, while also taking advantage of existing tools, creatively looking for opportunities to do what it can within its existing capacity.

Judy vows to bring honesty, energy, compassion and experience to City Hall. Her vision includes a back-to-basics plan that will restore trust in mayor and council, as well as rebuilding pride in the city by focusing on the issues that matter to Winnipeggers.

Winnipeg has grown into a thriving modern city, not because of our municipal leadership, but because of the determination of Winnipeggers to make our city great. Judy’s vision for Winnipeg is built on this determination: it is a shared vision with thousands of fellow citizens who are working together to make Winnipeg A City That Works.

Over the past several months Judy has shared with Winnipeggers a series of announcements that demonstrate how she will focus on each of these pillars to realise her vision for Winnipeg as A City That Works for everyone.

Judy’s vision of A City That Works begins with fixing city hall.

She will begin by creating the Accountability Winnipeg office. This office will fully utilize the powers of the city auditor, and provide resources to that office to bring stronger independent oversight to city business and the personal and professional conduct of elected officials and city management. This office will also provide a new avenue where employees can bring forward serious concerns about misconduct at City Hall without fear of losing their jobs or workplace harassment.

Judy also pledged to make Winnipeg A City That Works through more openness and transparency. Judy has disclosed her personal assets to demonstrate her commitment to transparency. She will make her calendar available and disclose expenses she incurs as mayor. Judy is committed to being more accessible to the public through social media and expanded office hours.

Fixing city hall requires that the voices of Winnipeg’s citizens are listened to. Judy knows that many Winnipeg citizens contributed their ideas to the OurWinnipeg plan, but it has gathered dust because the interests of a few well-connected developers have been put ahead of the public interest. Judy has pledged to fix this through the  OurWinnipeg Task Force. This task force, which will be appointed within the first 100 days of Judy’s administration, will be mandated to ensure that city policy and decisions reflect the spirit and intent of the OurWinnipeg Plan.

This group of community experts will also be asked to identify any gaps in the plan with a particular focus on economic development, transportation, environmental sustainability, quality of life, public safety and community diversity.

Judy’s vision for Winnipeg includes fixing infrastructure faster and smarter. The moment Judy announced that she was running for mayor, she put forward a practical plan to fix the years of infrastructure deficit that have accumulated under the previous administration at City Hall. Winnipeggers know that freezing our revenue for the past decade resulted in frozen pipes and crumbling streets. Judy’s plan for modest and pragmatic increases to property taxes dedicated to our infrastructure means that we will have an additional $60 million to put into our local and regional roads over the next four years.

Winnipeggers have also told Judy that investments in active transportation and rapid transit are needed to bring Winnipeg up to par with leading cities around the world. Judy will earmark $20 million for infrastructure improvements over the next four years to support active transportation from her four year, $400 million plan to fix Winnipeg roads. Judy will make snow clearing of sidewalks a priority to get people moving all year round. She will accommodate cyclists, pedestrians and wheelchair users with more time to cross streets at intersections. And she will emphasize walkable communities and neighbourhoods in any new suburban developments.

Judy has committed to completing the 2nd phase of Bus Rapid Transit as approved by city council. She will work with council and transit experts to determine the best way to proceed moving forward.

Judy’s vision for Winnipeg hinges on protecting front-line services from cuts while improving those that don’t live up to the standards you and your family deserve. Judy will commit one third of her proposed modest property tax increase to fund core services such as police, fire, paramedic, garbage collection, and snow removal, with the remaining two thirds being devoted to local and regional roads. Judy will implement an improved winter response plan, and improve 311 services.

Judy’s vision for Winnipeg includes collaboration with police, community, and business organizations to build a culture of safety in Winnipeg. The community-based approach taken by Chief Clunis is already achieving results. While there is still work to do, Judy enthusiastically endorses the approach and will build on that success through community building and crime prevention initiatives.

Countless Winnipeggers have told Judy that our city needs innovative ways of ensuring that everyone is included in the way our city works. To this end, Judy has revived and dusted-off the comprehensive OurWinnipeg plan – a plan that was developed through broad consultation with policy and planning experts as well as concerned citizens. By opening Winnipeg’s first interactive OurWinnipeg Studio, local planners, urbanists, academics, students, and designers can meet together to move OurWinnipeg forward and develop new ideas on how to make Winnipeg A City That Works.

Judy’s vision for Winnipeg is that of an inclusive city. Judy is committed to supporting small businesses through a small business tax freeze. In consultation with community, she has put forward a strong poverty reduction strategy and a comprehensive housing strategy. She recognizes the need to build a strong relationship with Winnipeg’s growing Aboriginal population and is committed to bring the Aboriginal community and other community leaders to the table to develop Winnipeg’s first Aboriginal Accord.

Judy is committed to making Winnipeg A City That Works. She has a vision, she has a plan, and she has the experience to carry it through.

Judy is the leader we need to make Winnipeg A City That Works.